Galpin’s won the 2019 House Sailing competition by just two points at the weekend.

The event had been postponed from June due to bad weather. Full report from Head of Sailing Laurie Dengate below.

The 2019 Annual House sailing competition was literally blown off the water in the Summer Term.

Our first attempt to run this competition on June 8 was thwarted by 45mph winds. This meant that no sailing could take place. However, a competition of sorts was still held, with house teams competing for honour and, in what is now a King’s tradition, the Toblerone Challenge.

This year’s Challenge was in the form of bin-bag racing (watch this space it will soon be an Olympic sport). This involved house teams being towed up wind on a Topper dinghy hull with three crew and two bin bags on board. 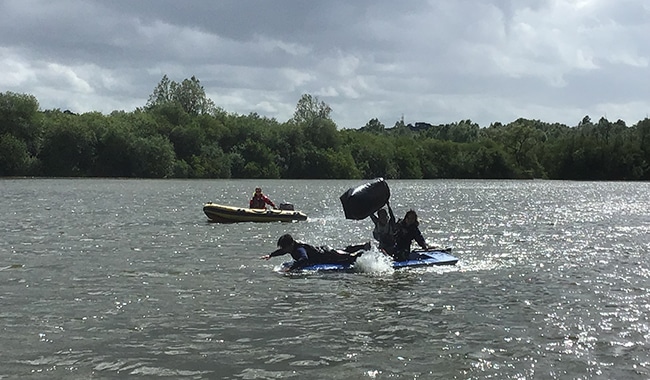 They then had to negotiate their way down wind through a slalom course to the finish line. The racing involved some ingenious tactics by very few teams, lots of down-right cheating by most and in very few cases the application of some sailing skills. After a very close competition, the International College were clear and worthy winners of the Trophy; a giant size Toblerone bar each.

On a bright, sunny afternoon (air temperatures of 19-22 degrees) with a gusty strong breeze, 30 students representing 10 Houses came along to Westbere Lake for the re-run of the annual House Sailing.

As sailing kicked off, the winds had built to a Force Four with extensive cloud cover which made the first few races exciting and unpredictable. We saw some close starts, with racing rules being actively applied.

There were 10 fast-paced races held with quick change-overs on the pontoon. It was a close battle between Galpin’s, Mitchinson’s and School House, there being no obvious lead throughout the afternoon.

The winner eventually finished only two points ahead of second place. The outstanding helm in the early stages was Alex Wilson, with 2 wins, closely challenged by Ben Helme and Phoebe Bradshaw. Nine individuals raced in the finals which was again a close start with Phoebe, Alex and Peter Jones getting across the finish line first.  The three of them held their positions around the two laps of the final race with Phoebe crossing the line first, closely followed by Alex and Peter.

The results are as below:

Individuals from Tradescant, Marlowe and Jervis also competed but without full teams.

The Junior Helm was awarded to Jacob Whitely .