We are delighted to be awarding 34 6bs with Honorary Academic Scholarships for outstanding results in their GCSEs.

“To the end that piety and good learning may in our Church for ever grow and flourish, and in their season bring forth fruit to the glory of God and to the benefit and honour of the Commonwealth, we do appoint and ordain, that … there will always be in our Church of Canterbury fifty poor boys, both destitute of the help of friends, and endowed with minds apt for learning, who shall be called scholars of the grammar school…”

Today, more than fifty scholarships may be awarded in total to both girls and boys and there are Honorary King’s Scholarships for outstanding performances in public examinations. King’s Scholarships always have been awarded for academic excellence. Means-tested bursaries, in cases of financial need, are assessed and awarded separately.

King’s Scholars attend school cathedral services in white surplices and sit separately from the rest of the pupil body. They also enjoy various small privileges within the school and more significantly within the Cathedral, such as representation at the enrollment of an Archbishop.

In usual times, King’s Scholars and Honorary King’s Scholars are formally admitted as members of the Cathedral Foundation by the Dean of Canterbury at School Matins on the first Sunday of the academic year, but school cathedral services are currently suspended. We hope to hold a service of admittance in the Summer Term. 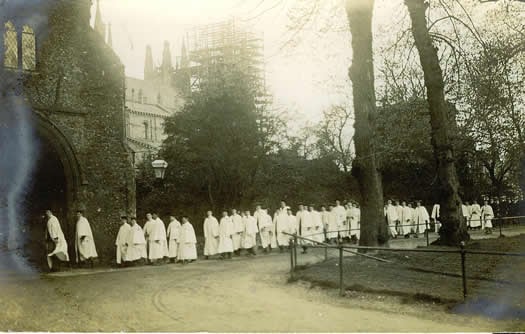 Read more about the history of King’s here.