Our Malthouse Campus was officially opened on Saturday, with Joanna Lumley describing the facilities as better than those in professional theatres.

The focal point of the site is a 334-seat theatre, boasting an orchestra pit, flexible stage and seating options and state-of-the-art dressing rooms, while separate drama and dance studios complete the school’s new home of Performing Arts.

A new sports hall, which houses the UK’s biggest school fencing salle, and The King’s School International College are also located at The Malthouse.

Speaking in the theatre, Joanna said: “I’ve got one note of warning. Any of you beloveds, any of you who do make this a profession, and you’re out in the world professionally to do it, this is the highest point. From now, it all goes downhill.

“You go to the dressing rooms and the facilities of the places which we have to work in, not only in London but around the country, you will be shocked! So make the most of it here.” 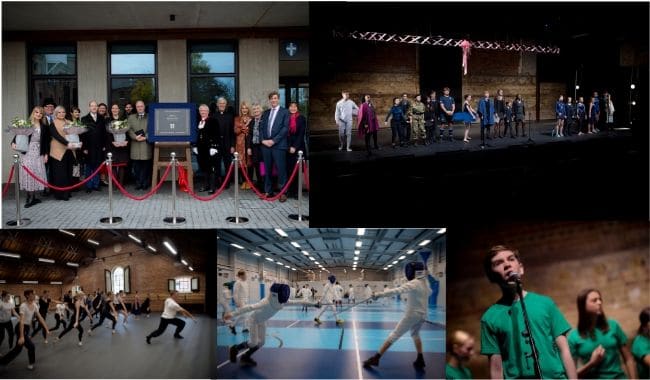 A plaque was then unveiled outside by The High Sheriff of Kent, Paul Barrett, whose family’s car workshops business previously owned the site between 1966 and 2012.

Paul spoke movingly about his memories playing there as a child, adding: “When I saw how the building has been transformed, I admit there was a tear in my eye. The Malthouse Theatre is a wonderful addition to local arts provision in Canterbury.”

We look forward to making new memories and showcasing King’s pupils’ talents at The Malthouse, starting with the first showing of our school musical ‘Little Shop of Horrors’ in nearly two weeks’ time!