Our Model United Nations Society attended a conference in Lingfield last Saturday, with two of our eight delegates named best delegate in their respective committees.

Read the full report written by Ikey Charoenpitaks (Tradescant, 6a) and Hannah Edwards (Kingsdown, 6b) below. 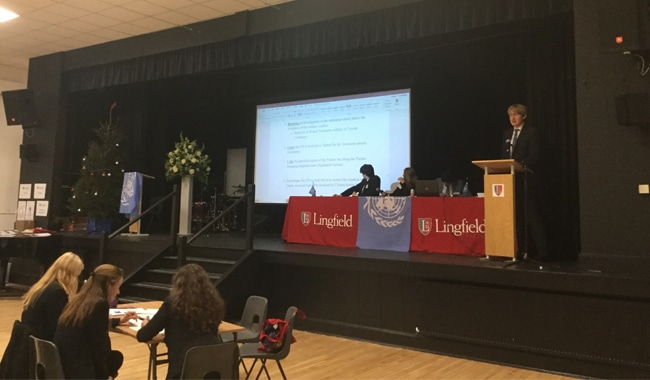 Throughout the day, the delegates were tasked with arguing difficult national stances such as defending China’s actions in Hong Kong. After lunch, a crisis session took place and it dealt with the escalation of the Chinese-American trade war into an invasion of Taiwan, and our Chinese delegates worked to form alliances and resolve the situation.

The King’s delegates were very successful at the conference and were given multiple awards: Hannah Edwards (Kingsdown, 6b) and Jun Lam won best delegates in their respective committees and Charlie Knight was highly commended. The Chinese delegation consisting of Ikey Charoenpitaks, Hannah Edwards, Ned Richards, Jun Lam and Nia Zhangaskina were awarded with a high commendation in the General Assembly.

Overall, attending LIMUN 2019 proved to be a very enjoyable experience for both new and seasoned delegates, participating in high-quality debates and making new friends. The King’s MUN Society very much looks forward to attending next year’s LIMUN conference.